Hardmoors 60 Reconnaissance the first half

The route and logistics 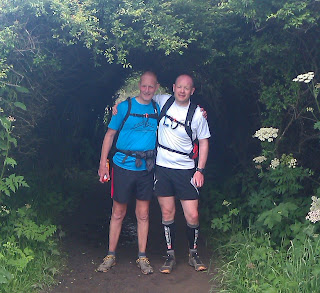 We ran from from Saltburn to Ravenscar(28.2 miles). The course is due to change this year with a loop being added near the start at Guisborough rather than at the end near Filey. So we picked Saltburn as a known point and decided to run to Ravenscar, that covers some of the more undulating terrain and would provide a challenging run. The logistics involved me picking up Alistair from Ravenscar and then him driving back to Saltburn to start the run. A couple of minor issues with this process due to Phill dropping out,  meant last minute changes to the  plan, there would now not be a car at the halfway point. I somehow managed to put my drop bag (food, water and warm cloths) into Alistair’s car to take to the start of the run!  Hindsight is such a wonderful gift! Have you spotted the obvious floor? The best bit was that I also put my car key into the drop bag, I was literally just about to set off from Saltburn when my brain cell kicked in!The runners Alistair Stewart, Ultra Moorsman, Tim Bateson and Phill (The Tap) Turton was a DNS. I think the picture above is of Alistair and Ultra Moorsman was taken at top of the stairs before the drop down for Ravenscar.

The aim of the Recce
From the outset this was a run to learn to the terrain, route and supply points for the first half of the HM60 route.  I must pass on my thanks to Ultra Moorsman for sharing his knowledge of the route and terrain, as it meant that we did not have to refer to our route planners once. For me personally the recce was about spending an extended amount of time on my feet after a frustrating couple of months trying to rid myself of niggles and an everlasting cold. I was also really looking forward to the coastal path as I had covered a small section in the Yorkshire Ultra earlier this year and had found that most enjoyable section of the route. 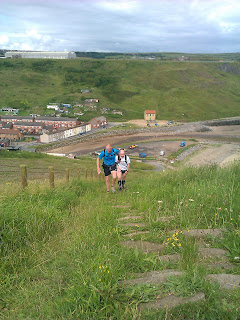 We set off at a steady pace and were immediately greeted with a climb from sea level out of Saltburn. We did not have to wait before getting our first climb. The picture to the right shows the view back towards Saltburn. The fact that most of the climbs start from sea level is a telling clue as to why I underestimated how much climbing would be involved. Most of the climbs are well below 500 feet so on paper that did not sound too bad. The reality is that most of the climbs start from 0 feet, so bear that in mind next time you look to do a coastal run. it is not like you are already starting from 250 feet. The vast majority of this course looks to be very runnable though, even after all the heavy rains of late, the footing was firm underfoot and the trails was in very good condition. We also got great running weather, bright sunshine and a lovely cooling wind on our backs :)

The profile for the section of the route that we ran is shown below. A couple of people had warned about the steps at Whitby (Which is just before the 20 mile point). For me it is the climb out of Skinningrove and the climb to Ravenscar that I will be looking to save a little bit of energy on. I even managed to fit in a portion of salt with some chips while climbing the steps at Whitby :)

I will not talk too much about the views as it might be a spoiler for anyone that is yet to run this route. All I can say is that after running this section as a training run I am even more excited about running it on race day. There are a couple of minor navigation points to look at for as you leave towns or where the odd trail splits in two. But by and large you just keep the sea on your left and keep running :)  The only other thing that kept popping into my mind is that I also want to attempt the HM 110 next year and it made me realise that there is still a lot of work to do once your reach Saltburn.


Nutrition
We managed to eat chips at Whitby and pork pies at Robin Hoods bay.  In fact hard to think of a run that provides so many ample opportunities for refreshments en route. There are even proper toilets and access to clean water at most of the small towns that you pass through. I am still fairly new to running and Ultra Running so pleased that I managed to keep myself going on a mixture of flapjacks (posh ones this time Alistair :) ), gels, corpse reviver, coke, chips, malt loaf and water. The key lesson for me with this run was to have variety rather than a bag full of 20 pence flapjacks! Glad to say that nutrition and hydration worked really well for me.

Finally
Many thanks to Alistair and Ultra Moorsman for keeping me company on the day. We plan to return on the 08/09/2012 to run from Ravenscar to Filey. So if you fancy coming along then give one of us a shout. A very enjoyable day great views, great weather and great company. Niggles and bugs dispatched. Job Done!
Posted by Tim at 20:09

Nice write up. I may have to take your nutrition advice this weekend when I'm out and about on the 10 Peaks Challenge.. Fish and Chips

Cheers Phil and good luck with the 10 Peaks Challenge this weekend. The salt with the chips was a great way to get my sodium levels backup and the chips left me feeling full so highly recommended :)