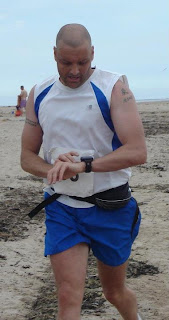 Like Coniston previously, I entered Northumberland Coastal Marathon purely as a training exercise, 26 miles in my legs in race conditions in preparation for the Hardmoors 60. From my training runs I knew I had been running strongly but as in all trail marathons you are experiencing for the first time I had no idea what the terrain would be like so making a firm prediction or indeed any prediction was simply pointless. Indeed after spraining ankles in my two previous marathon outings my real focus here was simply to run well and most importantly to avoid any further injury. A sprain just 5 weeks out from Hardmoors would 6 months work ending in failure and a gutting DNS. As this was primarily a training run I decided not to employ a long taper, my plan was to essentially train through. With this in mind I did a final long run of 22 miles the weekend before and then two steady 7 mile runs midweek before the race. Even after such a short taper I felt really fresh and was chomping at the bit come race day.

This was my first time running on the Northumberland Coast (bizarre given I live just a few miles away) and why oh why have I not been up here before? Alnmouth and the race route up the coast was utterly stunning but its beauty masked what was a seriously tough marathon course. The mixture of running surfaces ranged from soft sand to narrow single trails full of rabbit holes, tree roots, random rocks to packed gravel sections, welcome areas of tarmac, grass, oh and the now obligatory scrambling over rocks. We started out at 9.30am on Alnmouth beach just as the sun broke out from behind the clouds, it was the last time there would be any cloud cover, something I had not factored in to my planning and something that resulted in some of the worst sunburn I have ever experienced. It is now 3 days post race and I have still not been able to sleep under the bed covers ha ha.

As the race started I set out steadily and settled into an easy rhythm at the back of the leading pack of around 15 runners. Other than a couple of whippets making an early push the pace was very comfortable and the groups stayed together for the first couple of miles on the beach. As we scaled the steps onto the cliff top the group soon became split as the trail became a single track and far more technical. This first cliff top section was a bit of a navigation nightmare as the trail split on numerous occasions and offered various route alternatives. As it turns out most of these route options eventually converged back onto the same track but one of my few criticisms of this fantastic race was that a couple more markers would have been a major help. Thankfully the guy running directly behind me had run the course previously and was like a Sat Nav with his route commentary, this was hugely appreciated and definitely saved me making a number of wrong turns. The route is an out and back route that simply follows the Northumberland Coast north out of Alnmouth for approximately 12 miles and then incorporates a 2 mile(ish) loop at the top before heading home. While the course was tough and the sun burning hot, glances at my Garmin suggested that I was running really strongly, not only that but despite the miles rapidly ticking by I wasnt feeling any drop in my energy levels. I spent the first half of this marathon running with a group of around 6 runners, all of whom were making light of the terrain and were moving quickly and easily through the miles at an even pace. I had pretty much made up my mind to complete the race in this group as the company seemed to be making the time and miles fly past. To my great surprise though the group began to splinter as one after another members of the group fell away. After a while the group of six became a group of two and I ran with the leading lady Melanie Horan between 13 and around 21 miles. I really enjoyed this part of the race as a battle ensued between Melanie and the top female runner from the Plodders running club from Sheffield. They had a real battle royal upto 20 miles before the Plodders runner succumbed to Melanies strong pace and she put some distance between the two of them.

Now this is where things got interesting for me, 21 miles is normally the point I start to suffer, often struggle with hypoglycemia and as a result my pace drops away.....Today however, despite the heat I felt on top of the world. I had decided to run with no gels as I had a feeling they were responsible for making me sick in previous races, instead I had taken flapjack with me but had tried a piece at 13 miles and simply spat it out as it was too dry to eat. So my calorie intake during this race was nil. The aid stations provided Orange Squash and I consumed 1 to 2 small plastic cups of this at each station and this seemed to get me through the race without my energy levels bombing as they normally do around the time I would expect to hit the wall. Today there was no wall and from 21 miles to the end I gradually pushed on and began to catch and overtake other runners. We had been told at around 14 miles we were 13th and 14th in the race and i knew nobody had passed us so I became aware that not only was I running well for me, I was also getting stronger compared to other runners the longer the race went on. Was this indicative that the endurance training plan I have been using for Hardmoors ultra is actually doing its job? It would certainly suggest this to be true.

With the progress I was making I became aware that this training run had now taken on a totally different complextion. If I continued to make the progress I was and run at this pace I was looking at both a huge marathon PB but also a top 10 finish which is something I had never even come close to achieving before. All of a sudden after over 3hrs of running the race became serious for me and I dug in deep to open up a gap between myself and those behind me and to chase down those infront of me. At 23 miles an old adversary reared its ugly had as I rolled my previously injured ankle on a rock. I yelped in pain as I came to an abrupt halt cursing my luck and simply shouting NO NO NO! as my best ever marathon performance now seemed in jeopardy. I put my weight on the ankle and took a few steps, half jogging, half hobbling and the pain began to subside, the ankle roll was not bad and I knew that with the flat beach section to come if I could get there it was unlikely to turn again.

As I hit the beach I had two runners infront of me, this was great as by focusing on catching them it motivated me to keep my pace up and ensure that there was little chance the people I had passed previously were going to get back on terms. The beach seemed endless but I finally saw the finishing flags, unfortunately the last 200 meters were back on the soft sand and after 26 miles the last surface that any runner wants to see is surely soft sand. Every last bit of energy I had left was sapped by that sand and as I crossed the finish line I collapsed to the ground.

I finished the race in 3hrs 42mins smashing my trail marathon PB by 19 minutes. I had finished in 9th place overall and was 2nd in my age group missing out on winning my age group by just 4mins 30 seconds. I am absolutely delighted with this performance and it has given me a huge confidence boost before Hardmoors after a hard summer training programme and substantial weight loss. The only slight regret I have now is that I hadn't realised before hand how strongly I would run in this race as I ran well within myself for the first 8 miles or so and could I suspect have been very close to making up that four and a half minutes. Given my aims for the race however this is certainly not something I intend to dwell on.

In conclusion this was the first North East Marathon Club event I had taken part in and I was hugely impressed. The club specializes in putting on inexpensive, "no frills" marathons in the North East and I have to say if this race was indicative of their events they will be selling out their races in a few hours as I cant believe anybody who ran this race will not be back next year. Huge thanks to the organisers, volunteers and incredibly supportive runners for creating a great race experience and I will definitely be back next year to run this fantastic course.
Posted by Tim at 09:19