As you may previously know I recced the Hardmoors 60 route before race day, the only section I had not run was the start through Guisborough Woods. I did not follow a specific training plan for this race, my only goal was to increase the miles per week I ran and managed to run several weeks at 70 mile plus. I ran a total of 684.1 miles including the race itself in the 12 weeks leading up to the race.
Here is a link to my Google doc training plan https://docs.google.com/spreadsheet/ccc?key=0AoEsR9-m8bnmdG5IMUR6a0dKMlBGdFdhUlhHTkJJYnc

I entered this race as a stepping stone towards running my first 100 miler next year. On entering my  main ambition was to complete the distance within the cut offs. I had a great running this year though and had hoped to run this in somewhere between 10 and 12 hours. I was hopeful that this would be more towards the 10th hour than the 12th. This was perhaps a little optimistic to say the least. Given that my last ultra distance race had been in January. What the plan does not show though is that I enjoyed my training during the summer a lot. I started a new routine of running to and from work a couple of days a week. I tried to run on trails as much as possible and even took detours running home to take in extra trails.

The Race
The start of the race was delayed by 35 minutes. But everything was good natured and it was good to see that kit checks were being carried out for all runners. The race day weather was excellent and when we crossed the start line it was not long before I was climbing up in to Guisborough woods. I had not run this section before and it was a lovely run through the woods to link back up to Cleveland Way.


The first couple of check points seem to breeze by and I ran the first 26 miles in around 04:07 and was holding on to my aim of being very close to 10 hours. Just after that though I started to feel myself needing to slow down. Feeling the need to slow down was to become a consistent feeling for the rest of the day :) I went through Sandsend feeling a little tired but still ok. It was as I got between Sandsend and Ravenscar that I hit my first real problem. My water bladder must have developed a leak, as I had no water left. Ran for what seemed to be a long time between Whitby and Robin's Hood Bay with no water. On reaching Robin's Hood Bay I managed to buy some water and that water tasted heavenly! I phoned Adnan who was running with me from Ravenscar to let him know I was going to be behind time. When I started to run again after stopping at Robin's Hood Bay I knew I was slowing down a lot. It was great to meet Adnan(a fellow Sunderland Stroller) at Ravenscar. Although, I had mixed feelings of guilt, as it was supposed to an easy run for him between Ravenscar and Filey to see what the course is like and also act  a training run. On leaving Ravenscar I tried to put on a  brave face and at least attempt a very slow jog. I eventually had to admit to Adnan that the afternoon was likely to be a walk/run rather than a run/walk. I am grateful that Adnan took this in good heart and managed to take some great photographs of the route. I have shared some on this blog. Full list of Photos here at Hardmoors FaceBook page. http://www.facebook.com/media/set/?set=oa.534820779878184&type=1 and here https://picasaweb.google.com/109329056987770728995/Hardmoors602012 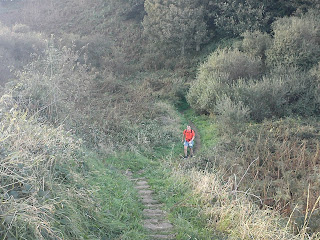 After Ravenscar things became a bit of a blur and a bit of a dark spot. . Thankfully Adnan was able to capture some of the great scenic views along this stretch. I think I was somewhere between self pity and leg cramp central. 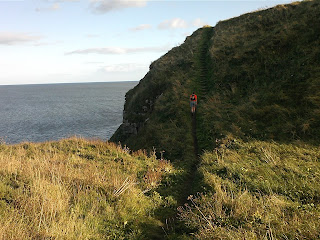 I am showing these series of photos to show both the lovely views and as reminder to myself that I save my legs for these inclines which are still runnable if you haven't set off way too fast :) 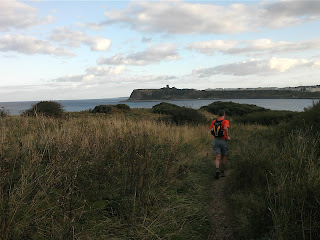 Scarborough castle comes into view and raises my spirits. Manage to get my legs going again . Scarborough is also not quite as close at it looks at this point as the bay snakes around to the right. 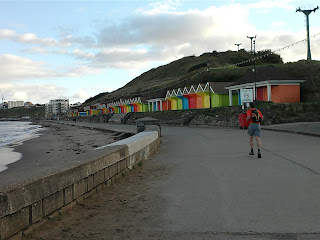 The thought of  my last drop bag keeps me going at this point. So does the lovely array of colours :)


So glad that Adnan captured this moment on camera. I remember running towards the moon and thinking what a faboulous view. Although I knew I was not going to be finishing in daylight anymore. My delayed finish and broken finish time dreams were almost worth it for it for this moment alone. As it went dark I enjoyed putting on my head torch and running in the dark it had Winter last time I had run on the trails in the dark. As we approached Filey I was convinced that I was over 12 hours, but I was not sure if the race started 08:30 or 08:35. It wasn't until the official results came out that I knew that I did manage to finish in just under 12 hours. I do not really feel I should even take the credit for the 12 hour finish. If it was not for Adnan and Emma (A relay runner) pushing me to run  a little more often I would not have made 12 hours! So a big thanks to Adnan and Emma :)

I ran the last 36.13 miles in 07:49:20. Probably the first and last positive split I will ever run! The aggressive start was a very painful mistake both physically and mentally. I started to develop bad leg cramps and my quads were screaming on the ravines. Brain damage by Pink Floyd also started playing in my head(and still is!) as my resolve to finish in 10 hours, became 11, became 12!

This was a bitter sweet race for me. I am delighted to have finished my first 100km and it tops of a great year of running for me. However, the course broke me, I set of  too fast. I had to dig deep to keep moving in the latter sections of the race. I can be thankful that I have learned the hard way on a 100km run, rather than a 100 mile run. Going to be a touch more conservative setting my pace for Hardmoors 110 next year, which will be my first attempt at running 100 miles. At the end of the day my pacing was too aggressive in the first 26 miles, this has left me feeling that the course had beaten me. To finish on a more positive note I loved this course and look forward to running it again next year :)

Finally Thanks to:-
Adnan, Ray, Alistair, Phill and Emma. A very big thanks to everyone involved in setting up this fabulous race. I look forward to taking part in the Hardmoors Series next year as a grandslam entrant.
Posted by Tim at 15:38