The Allendale Challenge has always been one of by favourite race not because its a great fitness test (being one of the first long trails runs of the year), or because there's generally a good mix of runners with a few old hands, a few newbies to trail running and a few local runners but because its a charming course, full of character that contains a little bit of everything with roads, paths, trails, gentle rolling hills, steep ascents (and descents) bogs and peat haggs. The race organised by North Of Tyne Mountain Rescue Team, is now in its 24th year and entry includes a pie and mashy peas in the pub at the finish. 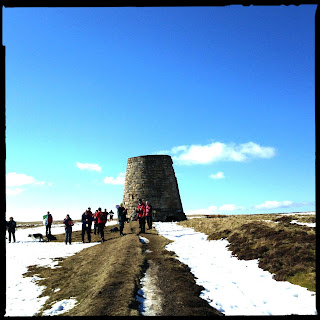 Over the past 5 years i've ran Allendale in all sorts of weather conditions - glorious sunshine, torrential rain, and ankle deep in snow, in fact i thought i'd seen pretty much all it had to offer, but this year for the first time I can remember the organisers made the decision to alter the course (for safety reasons - they were unable to get support vehicles up to some areas due to deep snow drifts over the past few days). Consequently the course was 23 miles rather than the usual 25.

The run started in the usual way with walkers getting a 2 hour start on the runners and followed the usual course up to the chimneys and on to nine banks, then the first of the changes took us left along the road past Farney Shields avoiding the hill up to Hard rigg and the boggy trail around black hill, the checkpoint at Killhope was still in but with an alternate route avoiding the usual peat haggs which where apparently full of drifted snow, from Killhope the route followed the usual track down to the road, a fun decent in the snowy conditions, the section along the river and up the Drag was bypassed with a slightly more hilly road section winding its way around and up towards Stobbs cross for the usual finish.

Despite this years route avoiding much of the deeper snow, there was still plenty of fun to be had running through snow around the course, in places the trail was down to a single trod cut through the drifts by the hardy runners and walkers ahead of us. In places it was hard to believe you were in fact in Hexhamshire and not somewhere in the alps. 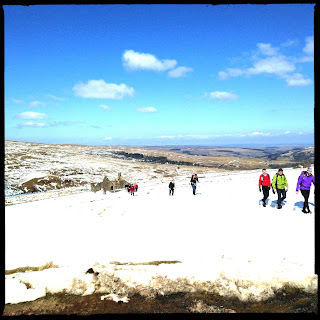 The temperature didn't get much above 6c in the shade, the conditions on the day couldn't have been much better, clear blue skies and beautiful sunshine made it feel reasonably warmer with many of the runners sporting t-shirts (and there haven't been many opportunities for that this year).

A combination of a shorter course, the additional road sections and the less boggy route made for much faster times this year for the 117 runners, and the course possibly favoured the road runners a little more than usual, but the deep snow and slippery conditions certainly meant it was no easy race.

NB. The Allendale t-shirt was an optional extra this year, refreshingly it was a cotton t-shirt rather than a tech-t, it sported a fetching design including 2 of the Allendale chimneys and a grouse that has appeared on several of the previous designs. In a slightly intriguing way under date at the bottom was a row of dots and dashes which if i'm not mistaken reads sdj in morse code - designers initials maybe?.
Posted by Unknown at 12:46