I would like to say a big thank you to everyone at the Sunderland Strollers club and have been made to feel very welcome. I did previously train with Birtley AC and that was a great club, but I did not understand why none of them were even entering the MOTN! To find some many fellow Strollers ready to run the 10k and marathon was fantastic! The marathon of the North was my first run for Sunderland Strollers and also my first ever road marathon. I class myself as a trail/ultra runner, but  did do the Kielder marathon last year as my first and only marathon. 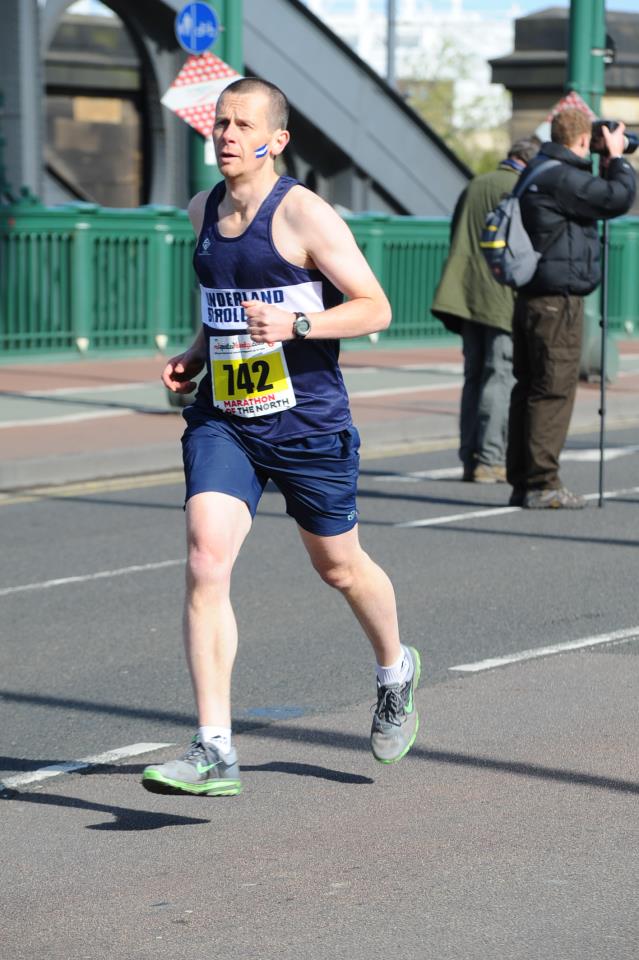 The run itself yesterday was like a dream. I had been fretting all week about a niggle on my knee and obsessing about what time I was going to run! I hoped that I should be able to run in under 03:10 but had no previous experience to rely on. I have only run 2 races all year one was a 50 miler and the other a half marathon in my home town of Blackpool.

Anyway come the day itself the weather was great and to meet up with some people from the club and get my war paint on was a great laugh (Thanks Tony). After watching Steve McMahon's post about pacing I had decided to try and keep Steve in my sights as he has run a  faster half marathon time than me. Steve I owe a big debt to you for this run, and will repay the favour one day as pace maker if I can. Being from Blackpool originally most of the course was new to me, and I enjoyed seeing Sunderland from a runners perspective. I really liked the  views down at Hendon beach and running back up to the city and across the bridge again was great. It was also great running in a Sunderland Strollers vest around the city I got loads of great shouts from locals along the way and that helped put an extra spring in my step (Tony Allen aspires great magic to the Strollers vest and I am beginning to think he is right).  Back to the run itself, at the half mark I decided to catch Steve up and began to think that a sub 3 hour was possible. I ran the the next 10km from the half way point feeling pretty good and was gradually working my way up the field and ran with Steve for a little while. I decided to push on a little more and crossed another fellow Stroller on the bridge (Kevin Blyth?) before seeing my wife on the other side of the bridge :) 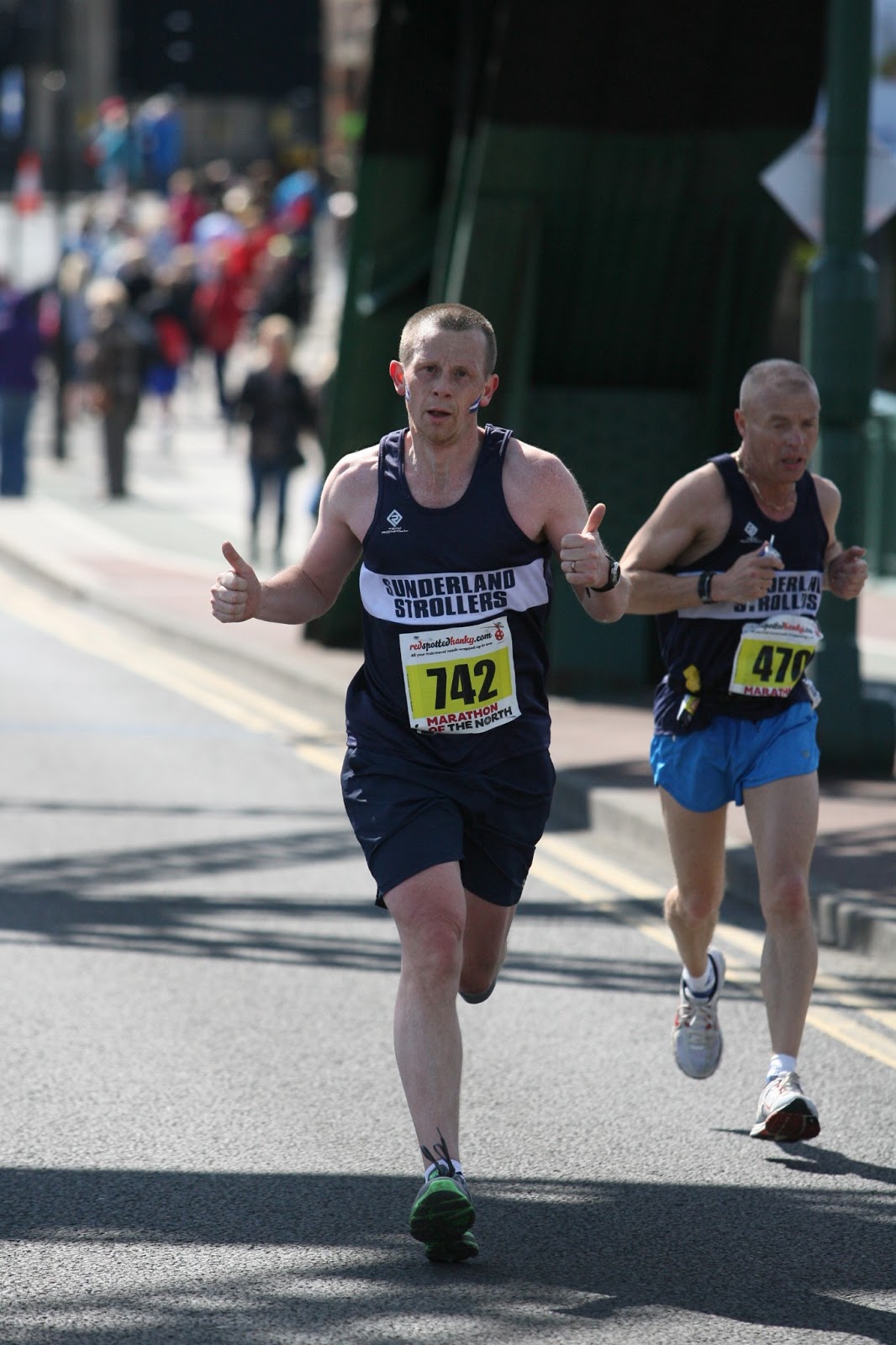 This was great for me, as for some reason she has not felt like coming to support me on the Ultra runs in the middle of no where.  This spurred me on again and then I am sure everyone who ran the marathon felt the pain as we turned up towards Seaburn. At the turning point at at Seaburn I had caught up with Paul Roper. The next few miles I found very tough. The trip around Roker Park was enjoyable to listen to the band, but having to turn off the sea front for a diversion was hard work! A well timed shout from Vicki, helped me push on. By this time I was no longer sure if I was still on for a sub 3. The maths part of my head had stopped working! Another great shout from Ashleigh as  I caught site of a 25m marker (Did anyone see the 25 marker!) and knew it was within me to push on get sub 3. Running that last few hundred yards was great listening to everyone shouting to push and try and make sub 3 and crossing the line in 02:58:26 was the icing on the cake :) 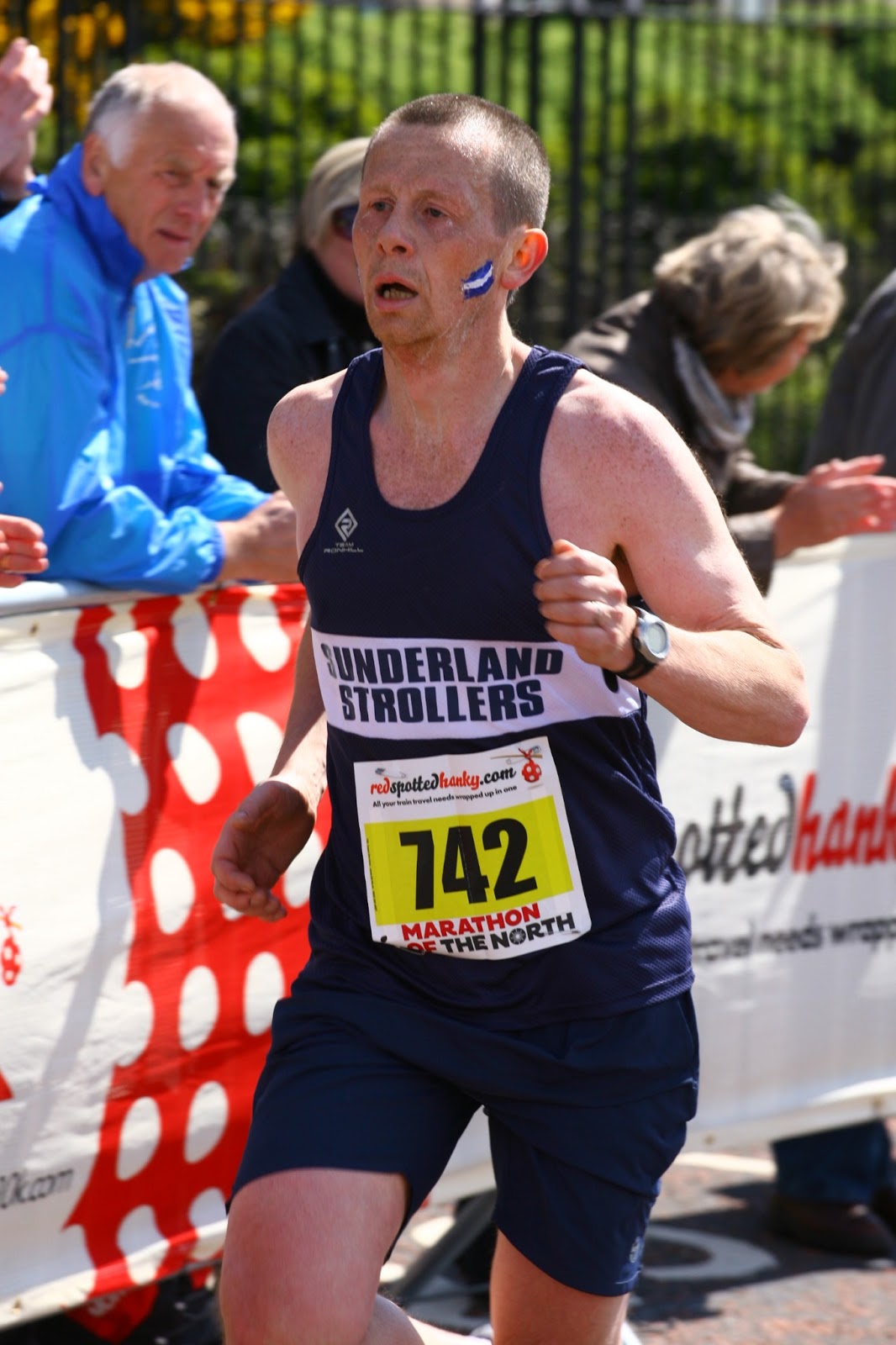 I was not sure about the route on paper, but having now run it. I really enjoyed the route and now believe Steve Cram when he said it was designed for runners :)

The most important thing I want to pass on to my fellow Strollers, especially those new to running. Is that 3 years ago I decided to start running after a close family member died. I was over 14.5 stone in weight and when I first started running it felt awful. I decided to start training for a local fell race called the Chevy Chase and entered for the first time 2 years ago. So I took part in that race and finished but did not do very well. But I loved the race itself and that inspired me to try Ultra running. Over the last 2 years I have slowly increased how much I run, and got to know more people in the running community.  It has been a great feeling to set myself goals (outside of work for once!) and just enjoy the simple pleasure of running. So for all those that are new to running in the club, hope you stick in there and enjoy running as much as I am right now :)